Jellysmack might be busy preparing for VidCon and producing exclusive events for industry partners (bowling party, FTW), but there’s one thing we always have time for and that’s continuing to build out our Creator Program.

Creators looking to widen their reach across multiple social platforms look to Jellysmack’s Creator Program as a turn-key solution, a way of deepening their fan base and growing revenue streams that doesn’t require any extra effort or financial risk from them.

So who’s joining the JellyFam? Leading the way are some of the biggest global creators, including:

Here’s a breakdown of each new Creator Program addition from the month of May.

Check back next month to see who Jellysmack adds to our Creator Program for June. We love TikTok, but for many breakout creators, it doesn’t pay the bills. Jellysmack believes short-form content creators can Go Artist Jo Steel has found incredible success as a creator by doing what they love, and they’re just getting started. 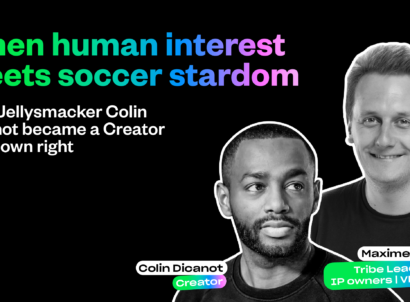 The true story of how Jellysmacker Colin Dicanot became a creator himself and ushered in a new style of sports journalism.